The European Union has yet to be created.

“Why Trump Can Safely Ignore Europe, Its Leaders readily condemn but never act” Jeremy Shapiro, Director of Research at the European Council on Foreign Relations, writes, on May 15, 2018 in Foreign Affairs. Does Shapiro just convey the usual Trumpish anti-European propaganda? Or does he rather pinpoint a symptom of European helplessness, its inability to find a common voice, its unwillingness to strike bold actions. 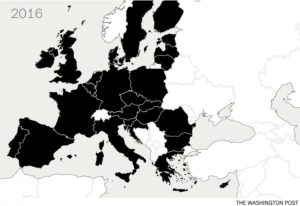 “The image that lingers at the end is one of European powerlessness.“ the same author summarizes his opinion in the Financial Times.

“America is no longer a reliable partner“, German Chancellor Angela Merkel was quoted earlier and “Europe must plot its own course”.

You may ask if it ever was. I mean, whether it was ever a partnership or just the rule of a far superior hegemon: the gorilla as an equal partner of the rhesus macaque, but this is the less important part of the message. It’ll soon be a thing of the past anyway.

So where is Europe now in the moment of need? Does it exist at all? Or is it just a phantom of wishful thinking? These three discouraging random quotes seem to reveal some deeper truth: There is no Europe – at least not in the sense of a player on the global stage.

Despite all European treaties Europe is unable to act a single political entity: “The European Union is based on the rule of law. This means that every action taken by the EU is founded on treaties that have been approved voluntarily and democratically by all EU member countries.”

The keyword here is “countries”. The EU is just a web of treaties, a loose association of stubbornly independent nation states that jealously and at all costs want to maintain their specific foreign policy profile and serve the vanities of their – in global comparison – local chiefs.

So it is not democratically legitimated by the “European people” in one direct step but rather so by the insertion of one more level of indirection. And exactly this one additional level causes nearly all the trouble.

The underlying principle became known as the subsidiarity principle. It could well have been understood as an opening clause for the EU to become a more state like actor. In that sense however it has rather created adverse effects.

It rather gives the impression, and everyone emphasizing the subsidiarity principle is confirming it, that acting as a single political entity is neither intended for the EU, nor would it be tolerated.

Is there no one opposing to this obviously dysfunctional set-up, or even taking steps? Well there are several movements – from grassroots to semi-official. Interestingly the majority of movements advocating more direct ways of democracy are inherently anti-European.

To prove that European peoples are different and must never be lumped together in one legal Unit, they are capitalising on old & plain stereotypes like, France dines, Italy sings, Greece dances, Germany works and the British maintain their strange sense of humour.

Survival obviously is not an option for them – besides that the argument is flawed in itself as it does not take the intra-state diversity into account with even peoples, nations or tribes not exactly being voluntarily part of the states.

There is anyway there is a growing feeling among economists, political scientists and even national governments that the nation state is not necessarily the best scale on which to run our affairs. We should better recall that far from timeless, the nation state is a recent phenomenon.

Before the late 18th century there were no real nation states, says John Breuilly of the London School of Economics. If you travelled across Europe, no one asked for your passport at borders; neither passports nor borders as we know them existed. People had ethnic and cultural identities, but these didn’t really define the political entity they lived in.

So, the nation state being a comparatively young concept, is its time is over anyway? Not to say it took its rise by sheer luck. The nation state can surely be understood as the inescapable consequence of some underlying developments, first and foremost to mention the enhanced means of communication via print, audio & video broadcasting, like newspapers, telegraph, radio, TV and more. Another driving force was the need to cope with the rising complexities introduced by the rapid industrialisation during the 19th century.

On one hand several local issues can better be dealt with on – yes – local level hinting toward a more medieval model of interacting sovereign city states. On the other hand the mounting problems, we are facing, if it will not be too late already, can only be dealt with on a far higher level. Worldwide would be required. European level is to be considered as the minimum.

There are indications that it will be again a combination of emerging new technologies and mounting outside pressure that will pave the way to overcome that obviously temporarily helpful construct of a nation state.

Digital transformation being more than a buzzword has the potential to transform not only the business sector but entire societies and finally the way we will rule our “countries”, or how ever these supra national entities will be called by then. (“Let algorithms rule – not politicians!” is in the making).

On the other hand a new era of renewed great power politics is emerging, with a far right America going wild following the script of an obscure Californian think tank, based in Claremont. Its members are dedicated followers of the German philosopher Leo Strauss (1899 to 1973) and deserve a closer look.

But already now we should have sufficient insight to expect that the “unleashed giant” US will relentlessly use his power and cause much trouble around the world – world war scale conflicts included. No single European states’ sovereignty will survive unaffected in this looming struggle of global powers. There are several possible scenarios of becoming marginalised and vassals of either of the great powers, either receiving our directions from across the Atlantic, becoming Finlandized at best or even being crushed between the fighting giants. Not a single pleasant scenario among them.

All this said and with no pleasant alternatives at hand, I like to state that I got the strong impression that time has come to finally build the European state. There will be not much time left to act.

Dorian Simon2019-09-12T14:06:40+02:00
X
We use cookies to ensure that we give you the best experience on our website. If you continue to use this site we will assume that you are happy with it. Read more about cookies in our privacy policy.OKprivacy policy